CHWs save mother and twins

IN the harsh and remote Middle Ramu District of Madang, access to basic health services is hard as in all other rural and remote areas of the country.

Most people living in rural areas have to walk for hours or days even to get to the nearest Health Centre, Aidpost or Community Health Post.

This is the story of Mrs David Ambugum (name given) from Tumbundugi village, Council Ward 6 in the Josephstaal LLG, who was a high risk mother at the time this story was taken and the Community Health Workers (CHWs) who cared for her.

Mrs David had already had four children and was pregnant with her fifth child. During an antenatal visit, she was told she had a twin pregnancy with breech presentation. She was considered as having high risk pregnancy and was told to come to Modilon General Hospital in Madang town for delivery in the last week of her eight month.

It was during Mrs David’s due time that Health Program Manager for Catholic Health Services (Madang) Patrick Angrai was at the Josephstaal Health Centre to commission 15 new CHWs. On the teams return trip Mrs David would travel back with them to town and go to Modilon Hospital.

For people who come from or have been to rural and remote areas, they would know the harshness and reality of living in such areas.

The Josephstaal LLG is located in the Middle Ramu District of Madang Province and was in the past accessible by road and air. Now it can only be reached by foot taking a 6-8 hour walk from the drop of point at Guam to get there.

This is Patrick’s account of the events: “On the day of our return, Mrs David had to walk with us by foot from Josephstaal for 8 hours to Guam to get on a vehicle to town. However we could not reach Guam on the same day so we had to overnight at Temandapor Aid Post.”

Mrs David then went into labour at 9pm but there were a good number of community health workers who had travelled with then and were able to assist her in her labour.

Patrick said: “The mother was severely anaemic and suffering from starvation and malnutrition. She lost whatever little blood she had left during the birth process.

She delivered the babies safely but went into shock after they were born due to her illnesses.The CHWs did an excellent job, they managed to stabilise her condition and even the husband assisted by holding a torch light for them to do their job and now both the twins and the mother are fine.” 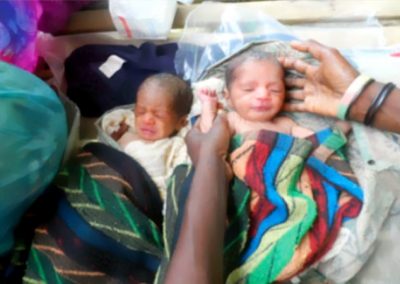 Mother holding one of her twins