ELECTION related violence in the Western Highlands Province forced the Kotna Health Centre, a facility of the Lutheran Health Services to close for an indefinite period.

The health facility was destroyed, staff harassed and beaten and the health centre vehicle had its windows smashed. Staff housing were also destroyed.

According to reports, the actual fight were between supporters of two different candidates (names not mentioned) on Thursday July 27th, 2017. Supporters, mainly youth of one candidate ordered all the health workers to shut down the facility and started destroying the building.

These young men then proceeded to destroy the guest house and staff VIP latrines and attack people with stones, knives, axes, sling shots and anything they could use. The situation got even more rowdy and community leaders could not step in to solve it. Everyone feared for their lives much less their properties.

The youth then went on a rampage destroying the premises of the Lutheran Health Services Highlands Regional Secretary. Food gardens were destroyed, houses burnt and properties damaged.

Nursing Officer Sr Wendy Manawe and her daughter were attacked in their house. They stormed the verandah and kicked open the door but Sr Wendy was blocking the door. As she tried to block them from entering the house, they punched her and kicked her in the face and ran in to attack her daughter but luckily no further harm was done as nearby villagers came in to help them. The attackers left but came back later and burnt down her kitchen (made traditionally) with most of her cooking utensils and beddings.

From reports, the situation is tense and community leaders have done nothing much to help.

OIC for Kotna John Demok said: “We have no enemies no created any. We provided the best possible health services to the people of the Dei Council only to be kicked and punched and have our properties destroyed and forced to leave.”

“Since the lives of the staff have been threatened, we feel insecure to provide health services as we live in fear,” he added.

Lutheran Health Manager for the Highlands Region Rev James Koi confirmed the indefinite closure of Kotna Health Centre until the situation could be managed.

“I am currently working with the PHA and police to apprehend the youths involved and also with the community leaders to guarantee safety of the health workers,” said Rev Koi.

He added that he did not want to make matters a tribal issue as staff safety was important and ensured that he was working closely with Mt Hagen police, the PHA and community leaders to resolve the matter. As of 2 October, the health centre has been re-opened for the community to use. 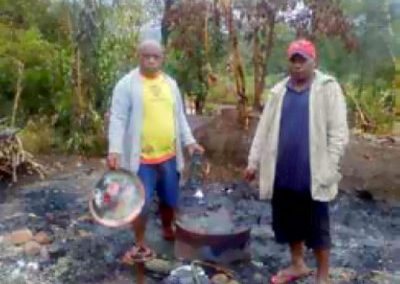 DHO, Dei District Mr. Rank with CHW Lukas Wamp at the scene (burnt kitchen). The fire destroyed the kitchen and some houses

We use cookies to ensure that we give you the best experience on our website. If you continue to use this site we will assume that you are happy with it.Ok